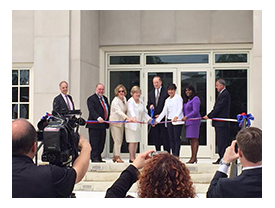 The ribbon-cutting ceremony marking the grand opening of the new National Water Center (NWC) took place on May 26, 2015. The NWC, located on the University of Alabama in Tuscaloosa, Alabama, is the country’s first facility dedicated to water forecasts, research, and collaboration across federal water science and management agencies.

Based on a long-standing professional relationship with NOAA, VSP was selected to provide the scientific expertise necessary to ensure the enduring success of the NWC. VSP recruits, hires, and supports scientists working onsite at federal agency laboratories across the United States. VSP has partnered with NOAA throughout the development and construction of the NWC, and is currently working to appoint between 30 and 50 associate scientists, software engineers, system administrators, project scientists, and other positions at the center. VSP staff at ceremony Left to right: VSP Director Meg Austin, COMET Deputy Director Greg Byrd, NWC Lead Administrator Whitney Robinson, and VSP Deputy Director Hanne Mauriello at the ribbon-cutting ceremony. 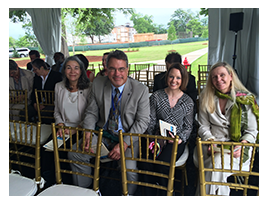 VSP Director Meg Austin, VSP Deputy Director Hanne Mauriello, and VSP’s NWC Lead Administrator Whitney Robinson attended the opening ceremony. “We have collaborated with Don Cline, the Director of the National Water Center, and Andy Rost, Chief Projects, Programs and Portfolios Officer at the National Water Center, for many years in appointing scientists,” Austin said. “Our working relationship goes way back to when Don Cline was a visiting scientist through VSP. We are very excited to have this opportunity to help staff this innovative facility with scientists, engineers and IT support.”

The NWC, which first broke ground in 2012, will bring together several different agencies, including NOAA, the United States Geological Survey (USGS), and Federal Emergency Management Agency (FEMA), to collaborate on water-related issues facing the country today. The NWC is a key component in NOAA’s commitment to create a Weather-Ready Nation.

NOAA Administrator Kathryn Sullivan said the building has “really spectacular collaborative spaces everywhere, and of course located on the campus of this great university with the expertise of both the geosciences department and the engineering department in particular, we really will be able to use this as a national hub to drive innovation, to drive scientific advances and to improve the information services about flood and drought and water quality that are provided nationwide.”

“The new National Water Center will help us create a safer, more secure, weather-ready nation,” said Pritzker. “Measuring, managing, and planning for water is complex, and the need for a more integrated approach has never been greater. Through this center, we will work with our partners in the federal government, community leaders nationwide, and the University of Alabama to deliver solutions to one of our most pressing environmental challenges.”

Senator Richard Shelby, whose support was instrumental in securing funds for the NWC, said the center will be an asset to the nation, giving water intelligence the attention it needs. “Water is going to be the big issue of this century all over the world but especially in this country,” Shelby said.

UCAR President Tom Bogdan, speaking at a UCAR All-Staff Town Hall Meeting in Boulder on May 29, echoed Senator Shelby’s concern. “Water is clearly going to be the issue, not just for our lives going forward, but for our children’s as well,” he said. “Thanks go out to VSP for their efforts.”