NASA's Living With a Star Program (LWS) and UCAR Community Programs' Cooperative Programs for the Advancement of Earth System Science (CPAESS) partnered in 2006 to launch the Heliophysics Summer School. Since then they have worked to foster heliophysics as an integrated science, teaching a new generation of researchers to engage in cross-disciplinary communication. 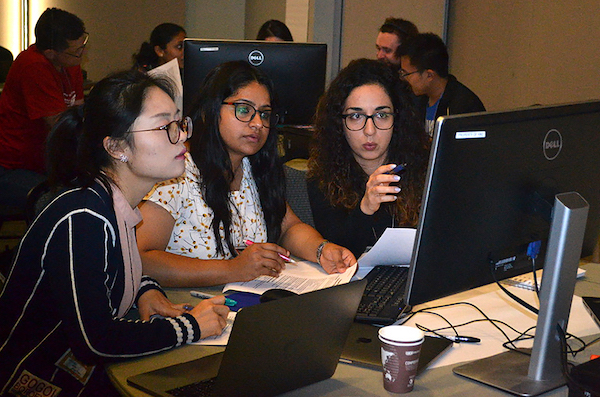 Heliophysics is the integrated study of the Sun, its planets, and space environment as a dynamic system. It focuses on the Sun's turbulent magnetic activity and its effects on the upper atmosphere of Earth, as well as on other solar system planets and the surrounding heliosphere. It encompasses many areas of inquiry: cosmic rays and particle acceleration, space weather and radiation, dust and magnetic reconnection, solar activity and stellar cycles, aeronomy and space plasmas, magnetic fields and global change, and the interactions of the solar system with our galaxy.

To facilitate and foster the education in this field we have partnered with NASA on these efforts:

To increase school capacity we now have both a Virtual and In-Person portion. The In-Person portion takes place in Boulder, Colorado. It is open to both graduate students and educators and focuses on the physics of space weather events that start at the Sun and influence atmospheres, ionospheres, and magnetospheres throughout the solar system.

Trains the next generation of researchers needed for the emergent field of heliophysics which embraces all science aspects of the Sun-Earth connection. Explore this fascinating opportunity.

For faculty & students enabling them access to presentations, problem sets and solutions, textbooks, and more from past Summer Schools.

"Living With A Star" Institute

For researchers & engineers who collaborate with each other to outline new space weather research that will critically improve an existing technology area.

NASA Lead Program Scientist for the Living With a Star Program Dr. Lika Guhathakurta provided a slide deck showing some of NASA's latest research which contained many useful links. Please find it here to learn more.